The world has now become more familiar with the world of Anime, manga and cosplay like never before though even now a person in their sixties may not fully know what it means. The fascination anime has taken off because there is something so fascinating and absorbing about the way these roles are shown and drawn out. There is no detail that is too small or trivial. You have to look at amazing anime drawings and manga faces to know what we mean by the attention to detail. They have become so coveted and absorbing that people are now even getting cool anime tattoo designs, which means that these hold a deeper significance for them that we may not even be aware of. In this article, we will take you through the process of drawing anime eyes.

This may bring to your mind best ever cosplay attempts so far, which have managed to bring a great deal of panache because of their eye for details. 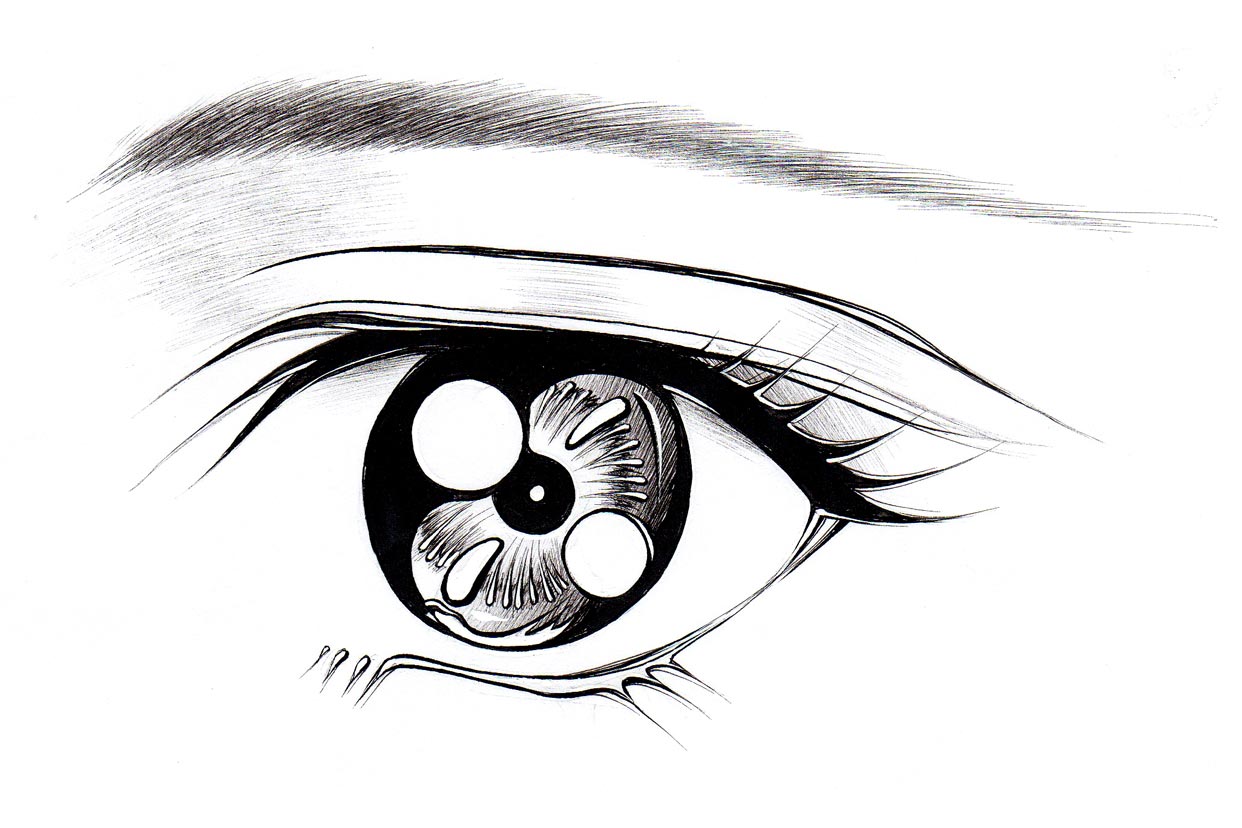 Here is how you go about drawing one of the most vital features of an anime or manga character’s face. In this case, we are going to keep the eyes of the female in mind to show you how it is done. 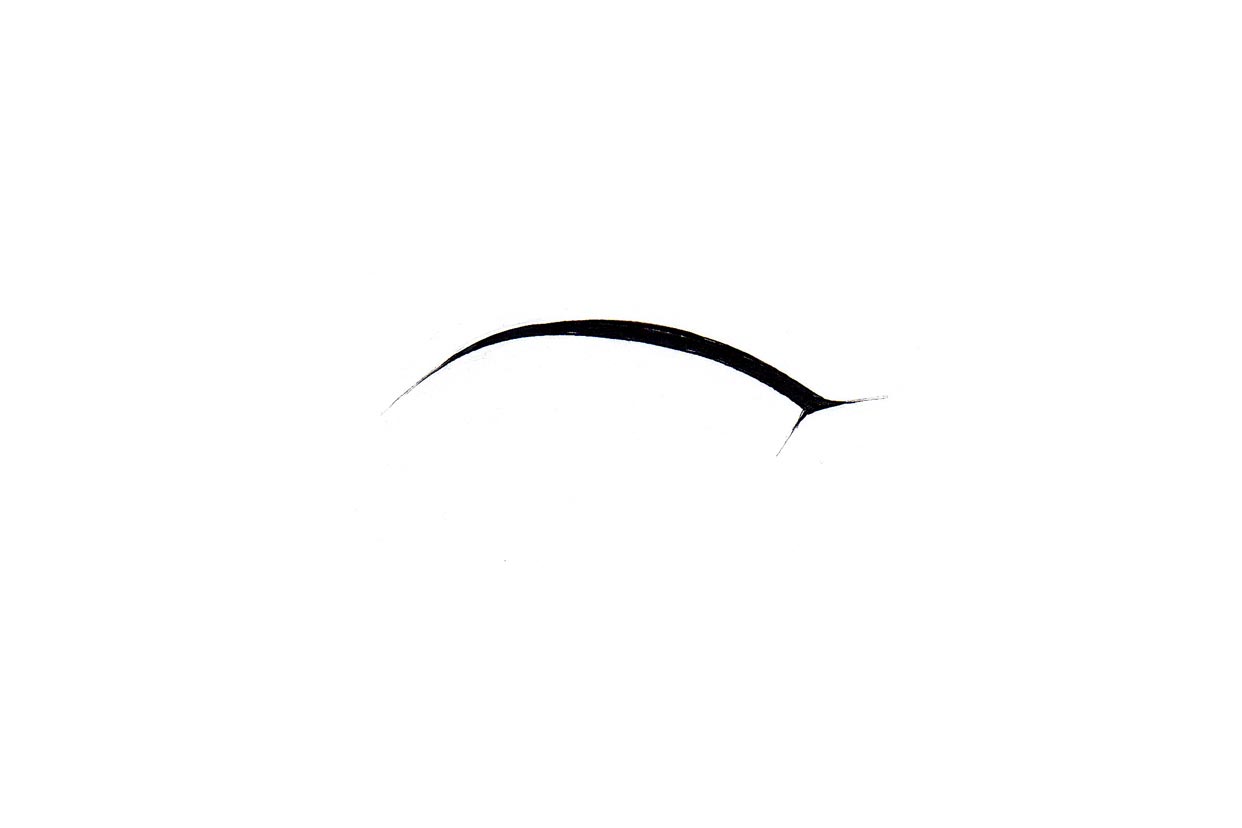 First of all, begin by drawing a line that swerves upward to form a curve and is a bit on the thicker side at the highest point. The eye that we are drawing now is on the right part of the eye so you need to make the left end of the curving line higher than right is. The top of the eye can be angular or a perfect curve depending on what you want it to look like. 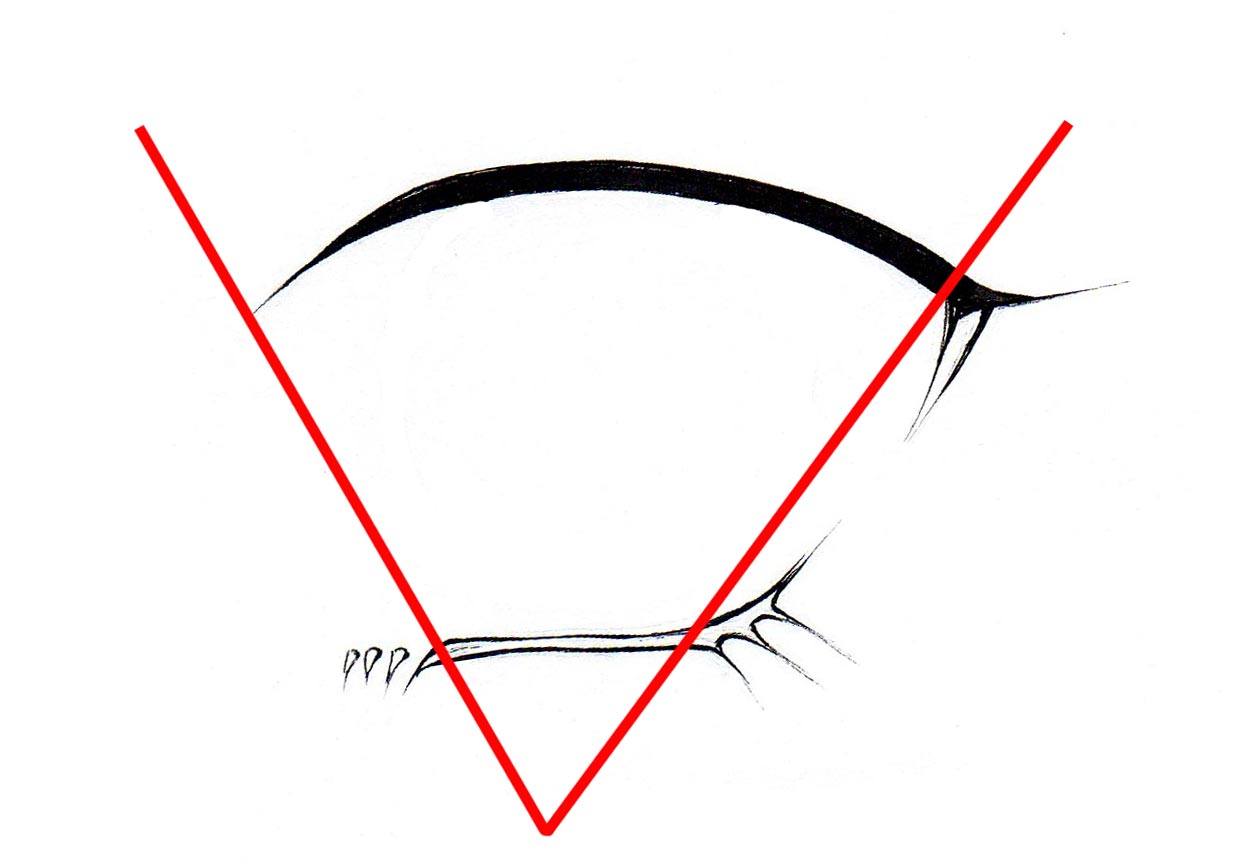 Once you are done with the first part, draw the lower portion of the eye. To ensure that you make this work, we suggest that you trace out lightly diagonal lines that point downwards. These need to start at the top portion of the eye. The slope steepness of the lines you draw will dictate the size (how large and how wide) of the eye. The steepness of the lines you draw will have to vary based on how large and wide you want the eye to be as they are meant to be used as a guide for the lower part of the eye you are drawing. The lower line should curve a bit to the right and also should be thicker in the same corner. 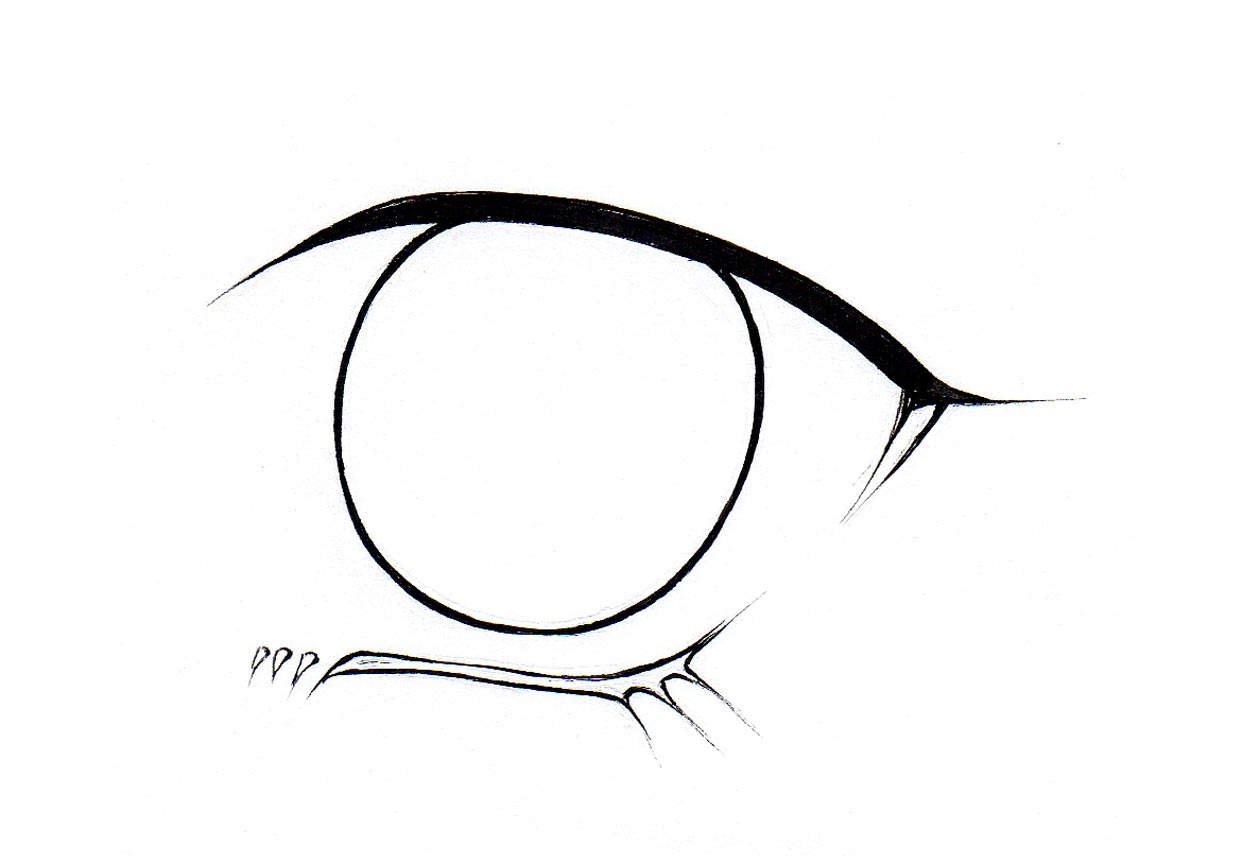 Gently remove the guidelines with an eraser and now draw an elongated oval inside the eye. Many characters, you may have noticed have large circles for their irises, but we are going for a thinner oval here. You can tweak the shape to make it wider if you want. You will need to obscure one part of the oval with the upper portion of the eye as the complete iris is generally not seen. That is why this becomes important so that it looks natural and not creepy. 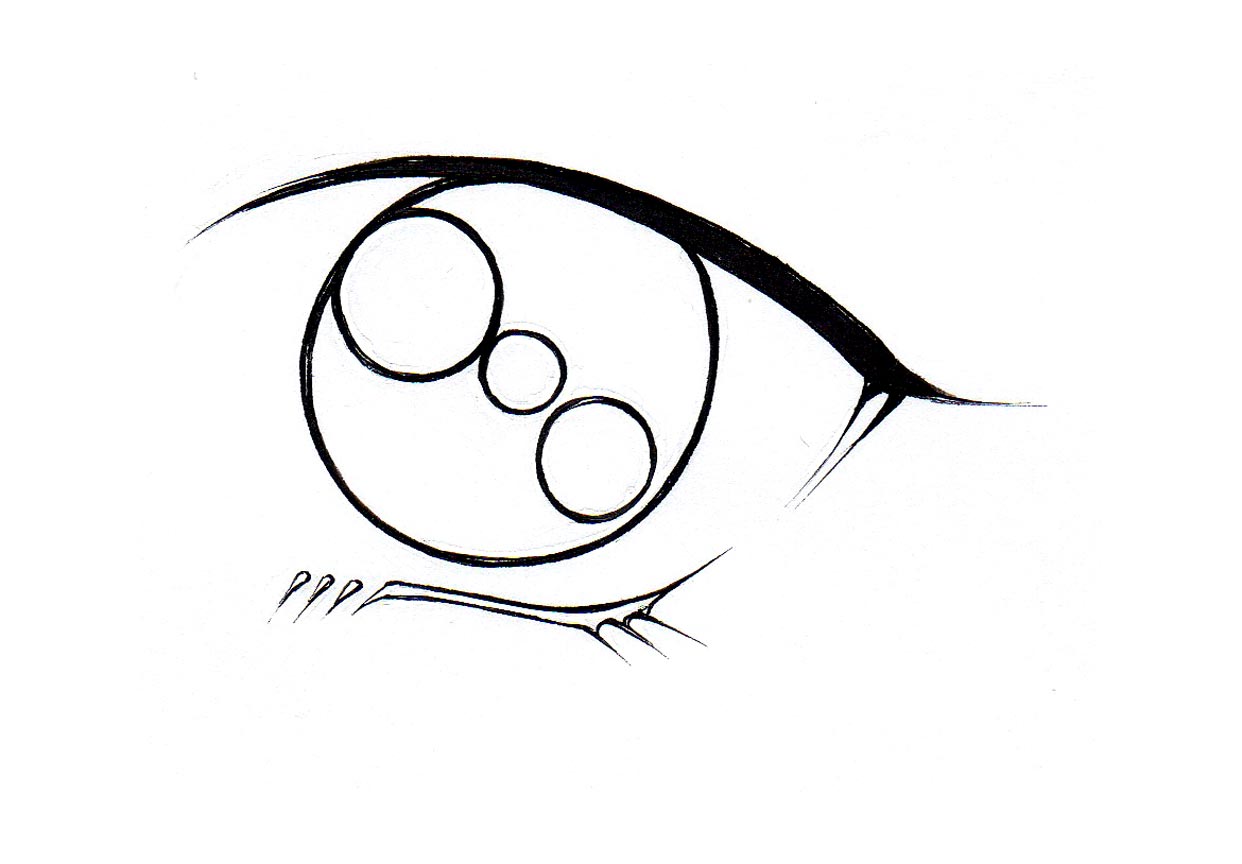 The time has come to outline the light glares as anime eyes almost always have some kind of shading effect. They actually have a lot of shading and have plenty of areas that glisten. Ensure that you select a light source and stick it throughout the drawing. For instance, if the light is from one direction then all the highlights also have to come from the same direction. Draw out two ovals on the longer side – one that is large on the left part of iris and a small one on the other part. 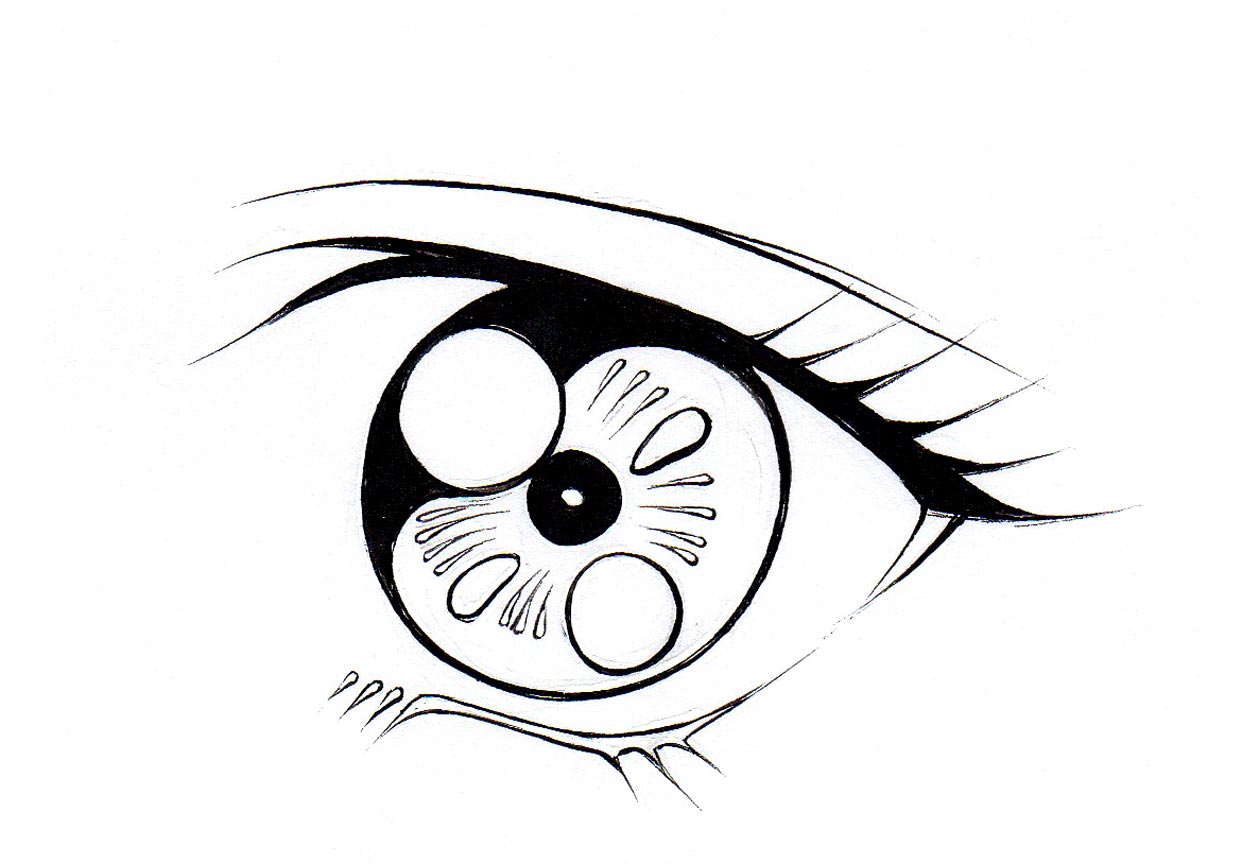 Now proceed to draw the pupil under the light glares as highlights are on the top and not on the bottom, which is why the pupil cannot be on the light glares. Start drawing the eyelashes – if you wish to can make the eyelashes spiky or in a different way. The lashes have to follow the line of the eye so that it looks natural and nice. You also need to draw the eyelid on the left side of the eye and should not be haphazard. This will have to be thin and curved which starts from the top of the eye.