Today in this article we will look at some of the reasons, the customs, the peculiarities that are part of the quaint festivals that take place in Italy.These are some Fun Festivals of Italy.

Battle of the Oranges : This takes place in the 3rd week of February and in the city of Ivrea which is in the north of Italy. The popular theory points to defeating the rule of a cruel despot called Ranieri Di Biandrate. He is supposed to have claimed rights to any bride on her first night after the wedding. One of them a lass called Violetta refused to comply and instead cut of his head. The other theory is that Violetta stood up against the Holy Roman Emperor Frederick of Swabia. During this one lady is picked to play the part of Violetta. The festivities occurs with a battle of oranges with nine teams wearing red Phrygran hats fighting it out 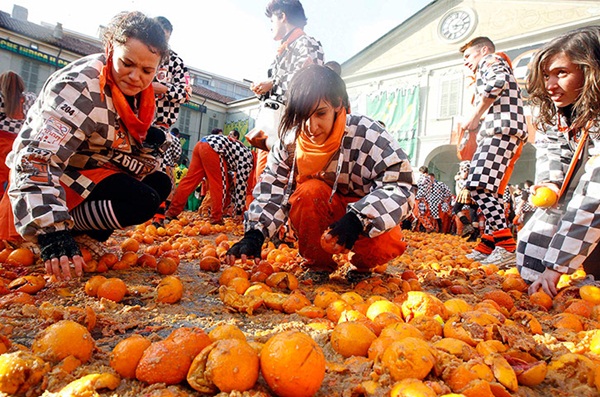 Game of the Bridge (Il Gioco del Ponte): Taking place on the last Sunday in the month of June, this event occurs in Pisa. This event can be traced back to 1568, February 22 to be precise where teams fought against each other for the symbolic rights over the bridge on Arno river. Today the battle is more of an enactment and reliving the past from a cultural point of view.. There are people who represent the north and south sides of Arno. The parade has 300 people who dress up in costumes and armor from the 18th century and carry banners of their team. The meeting of the parades from opposite sides signals the beginning of the battle game. The aim is to move a seven ton wooden trolley into the other team’s area and seize ownership of the bridge. 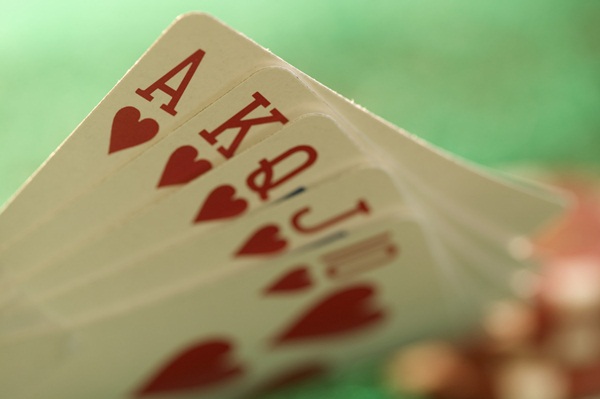 Festa della Madonna Bruna: occurring on the 2nd of July in Matera based in Basilicata this event marks the Patron saint Maria Santissima della Bruna’s day. The legend states that a peasant acquiesced to take a noblewoman along with him to Matera on the condition that she left the traino before arriving at Matera so that there be no doubts By the time he reached Matera, the lady had disappeared and a statue was in her place. A letter addressed to the Bishop revealed that she was Virgin Mary. The event that takes place is the procession of the Madonna with child taken during the afternoon to a papier mache float close to the church of Annuziata which is where the event related to Virgin Mary had occurred. After three rounds the statues are put within the cathedral and then the float is smashed to pieces. There are fireworks to round off the event. 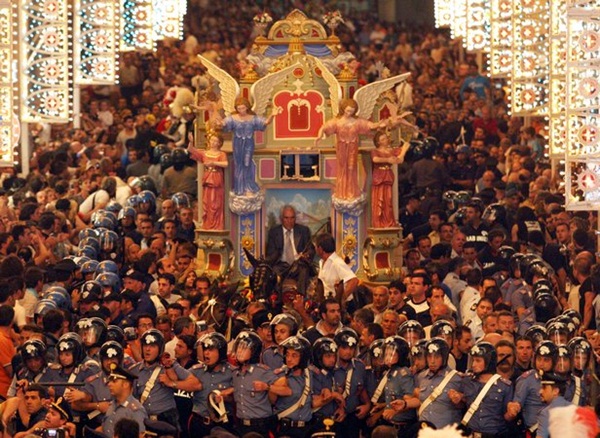 Festa della Sensa: Taking place on the 19th and 20th of May in Venice and is also called the Ascension festival. It represents both the start of trade, military and political expansion of the Venice Republic and the conclusion of the secular fulmination between the Empire and the Papacy. The victory of the fleet that left on May 9th 1000 and the peace treaty in 1177 are celebrated in this event. It is marked by the event called “Wedding with the Sea” and is celebrated by a regatta that moves from St Mark’s to St.Nicolo and a throwing of a gold ring into the sea as was done earlier. There are water parades, rowing Venetian style and the Sensa market 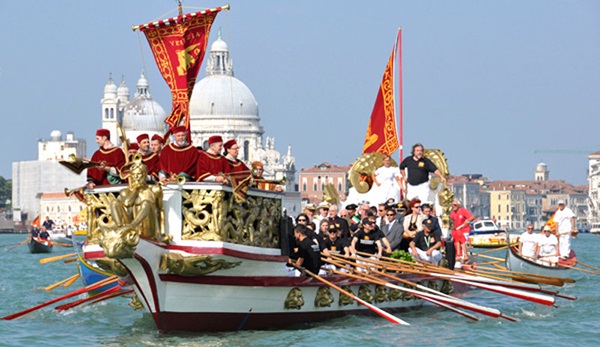 La Corsa dei Ceri: Celebrated on the 15th May in Gubbio it marks the demise of Bishop Ubaldo Baldassini, who was recognized as the Protector of Gubbio. Candles (Ceri) shaped like battering rams are carried by 3 groups of men to the Piazza Grande to the Palazzo dei Consoli where small statues of St. Ubaldo, St. Anthony and St. George are attached to the end of each candle. When the bells are rung, the teams lift the Ceri in standing position and the captain of each team standing on top of the pole holds a ceramic vase of water which then flung on to the crowd. Then the Ceri is paraded thrice around the Piazza and followed by a huge seafood feast. By 4.30 there is a procession of sacred relics after which a race takes place. 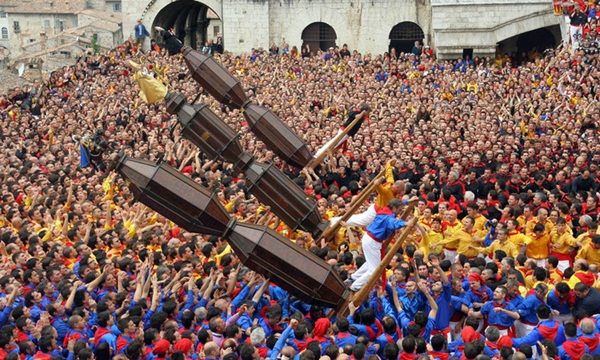