A kitchen is a place where the ambrosia comes from. The place which fills your whole home full of mouth-watering aroma. Well, that’s one side of the coin. Now flip it to the other side. What do you see? Mess! A lot of mess! A few drops of oil here a little sauce there. There’s no wonder that you feel like you have run miles after cleaning that icky stuff from your kitchen counter. So let’s not even talk how much it pains to clean that rusty cast iron skillet of yours. That rust sticks to your skillet like a gum. But hey, don’t throw that away. Here are few methods for How to Get Your Rusty Cast-Iron Skillet Rust free.

You could use these tips too!

How to Make Your Rusty Cast-Iron Skillet Rust free

To restore that rusty iron skillet of yours you need to first scrub it with a pad or a steel wool. Get rid of all the rust by scrubbing forcefully. You could use a little water and dish-washing soap while scrubbing the skillet. For the thin layer rust, use a little amount of baking soda and add few drops of water to make a paste and then scrub this paste over the rust. After a few minutes rinse the skillet off with water.

Now that the skillet is rust free, you need to restore it. This means you need to perform the process of seasoning to prevent the pan from getting rusty again. Don’t worry, that’s simple to do.

You need to preheat the oven to 350 degrees. In the meanwhile, dry your skillet thoroughly and apply cooking oil to it. Yes, you read it correctly. Dab oil on every surface of the pan including the backside and the handle. Now just put the skillet into the oven for an hour. Don’t rush to take it out. Let it cool on its own and after an hour or two, you will get a re-seasoned rust free skillet.

Just like the skillet, redecorate your home too with these amazing ideas. 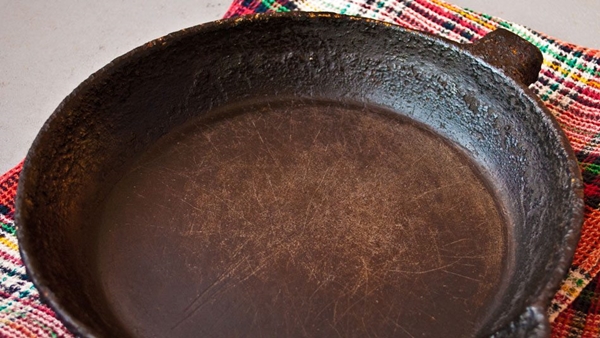 To get rid of the rust from your cast-iron skillet, you could use salt too. Yeah, a salt will help you in getting it rust free. Just pour a spoonful of salt into the skillet and start scrubbing until you remove all the rust from the skillet. I know, a lot of strength will be needed, but no pain no gain! Here are some great kitchen layout ideas for you. 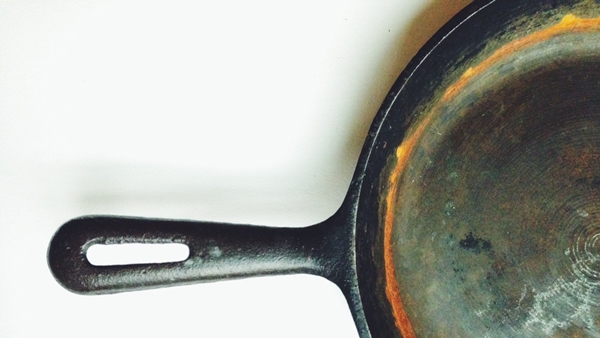 For that stubborn rust, a little amount of vinegar will be very helpful. Soak your pan in the solution mixed with vinegar and water. But while you are at it, make sure that you don’t keep the skillet soaking in it for a long time. Because the vinegar will do irrevocable damage to your pan. So better take the skillet out of the soak as soon as the vinegar dissolves the rust. Yeah, you better keep an eye on it.

After getting the rust out your pan it is essential for you to re-season it. Without re-seasoning, you can’t really use the skillet. So use the cooking oils such as vegetable oil, peanut oil, canola oil, etc. Although, it’s better if you don’t use olive oil for seasoning. There might be a lot of smoke without fire because of it.

It is often said that the cast iron is quite difficult to maintain. But with proper care, you could reduce a lot of your pains. For instance, take a few precautions that will prevent your skillet from getting rusty.

Use some of these tips to keep that rust from happening.

That’s all! Use these simple tips and do the process of removing the rest and then you are good to go. Clean it and cook a delicious meal in it. P.S. Do you like gardening?

Go ahead, enjoy your meals.